“It’s a great way to share a piss” said Donald Gallagher, as we left the legendary gents’ toilets at Liverpool’s Philharmonic Pub. His appreciation of the marble “walk-in” urinals, the tiling on the walls, the craftsmanship on the wooden urinal doors was almost (dare I say it?) sexual. And when we saw the tiling below the bar and the stained glass above it, I feared I was about to see, and hear, the, er, “climax” of his visit to Liverpool. Thankfully, he regained his composure once the first drop of local beer touched his lips.

Donald is a member of the “StopShopping Gospel Choir”, whose inspirational “service” I had just attended. They were on the “Church of Earthalujah UK tour, with powerful, comedic gospel singing and preaching about anti-consumerism, environmentalism, neighbourliness and community. It’s all so skilfully done that as happens in “real” churches, some people “testified” that they had been converted that night! Reverend Billy, the charismatic leader of the Church was even able to make the congregation shed all British inhibitions, clapping and hollering along, “Preach, Reverend, Preach!” “That’s right!” “Earthalujah!”, “Granbylujah!”

Granbylujah? Yes, earlier in the day, the choir had gone to “minister” in the Granby Triangle, that famous part of Liverpool at the centre of the Liverpool 8 uprising 30 years ago. Since then, the City Council, Housing Associations and private developers have succeeded in reducing the Triangle to a wasteland. Most of the houses have been demolished after (the residents allege) deliberate neglect of perfectly decent houses and a flawed consultation process which “found” that most residents would prefer modern houses. Not so on Cairns Street, where the last remaining residents are refusing to move, and have transformed one of the last surviving streets in the Triangle into arguably the most beautiful street-garden in the city. The occupied and bricked-up houses have been painted in bright colours, flowers of every type adorn the walls and pavements, and children from 6 to 80 “hang-out” and pass the time of day. Many people choose to walk or cycle along Cairns Street on their way to work – it’s that beautiful, and the atmosphere that warm.

At the corner of Cairns Street and Kingsley Road, the residents (and some outsiders) have this week started a picket to stop the demolition of two more houses by the council’s preferred developer. In place of those two are proposed four more “little boxes”. The residents say they should instead be refurbished, and that they know local families that would happily occupy them. The developers, who haven’t built any new houses in the Triangle for a few years now, are however intent on demolishing them anyway, because refurbishment is not an option. The fact that VAT (Value Added Tax) is now 20% means that preservation and conservation is that much more expensive than new-build, which attracts zero VAT. Just as Southern Cross found that care of the elderly is not “economically viable”, so property developers will argue that sensitive neighbourhood development is economic madness.

One could argue that the economic madness is not just the disparity of VAT on new-build versus refurb, but the billions spent on defence and war-mongering by our governments who try to persuade us that there isn’t enough money to take care for our elderly, our communities, our jobs, the environment. This was agreed by all in the Philharmonic pub last night. Donald, the white Bhuddist New Yorker; Dragonfly, the Black Texan woman; I, the Nigerian adopted scouser architect-turned-actor and Eleanor, the “grandmother from Granby” in the thick of the picket. She said a powerful thing too - that it was so inspiring that an American “Church” can take their story, sing about it, twitter and youtube it (whatever that means), and show that they understand, and care. Even if they managed to get a mention on Radio Merseyside a few days ago, and the Echo ran a story about it the following day, these Americans came and sang to them on their street, sang and preached about them, about the power of community.

Even if they lose their battle to save those houses, and they put up four little boxes that will not be worth travelling any distance to share a piss in, the memory of this day is one she will carry with her to her grave. The day when people from the other side of the world used their art as a weapon in defence of the voiceless, like, as Reverend Billy preached, the great Paul Robeson.

Amen, and Granbylujah to that! 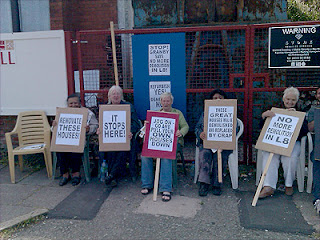